Job-Loss Insurance for the Mass Underserved 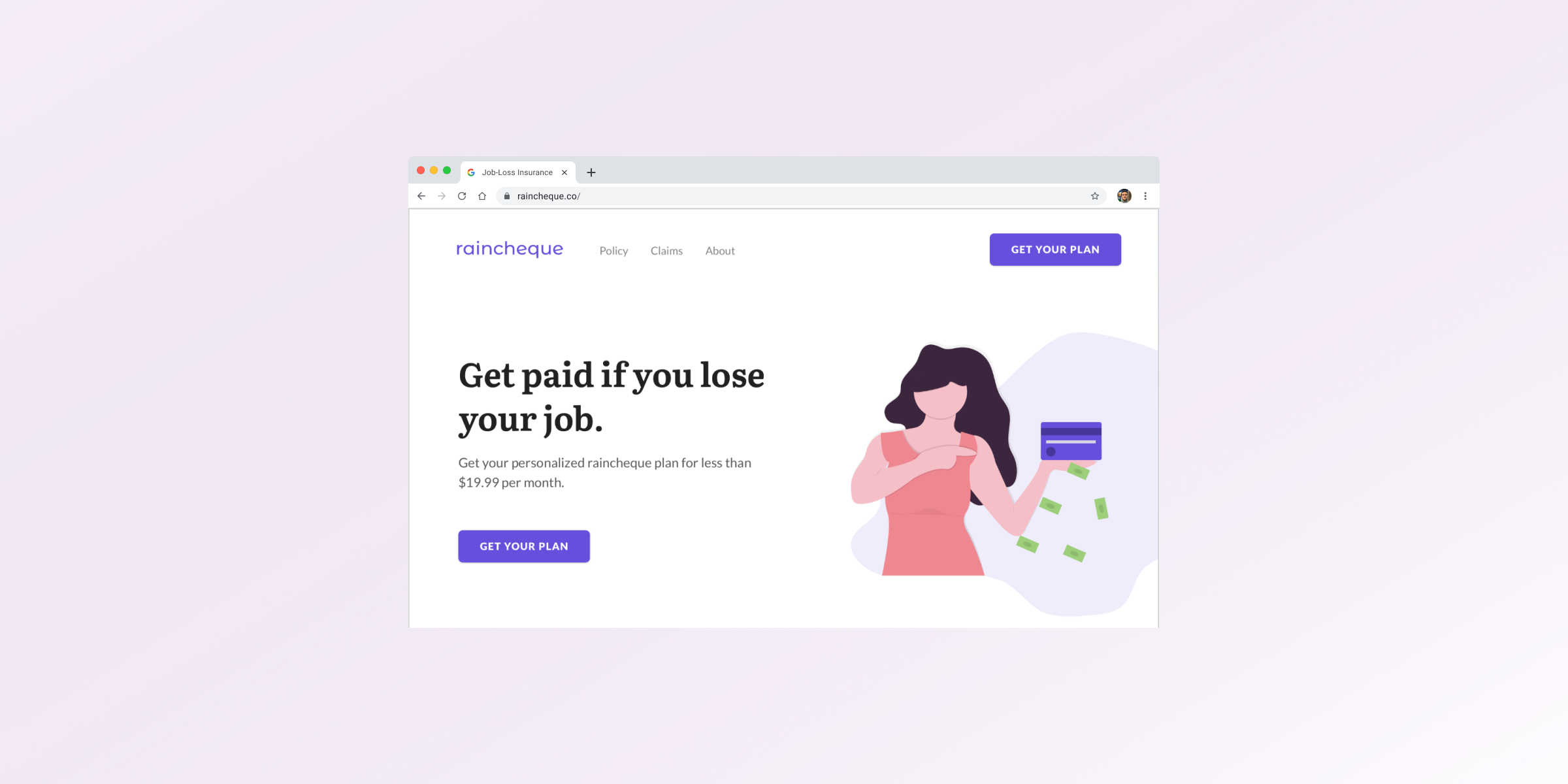 Genoa Labs is an innovation team within RBC Insurance tasked in researching the mass underserved market. When I joined the team, we worked on exploring Raincheque, a job-loss insurance product. Though this initiative was continued after my departure in August 2019, it was soon shelved with the onset of the COVID-19 pandemic that started just a few months later.

Millennials aren’t purchasing insurance as much as previous generations

Upon joining the team, we had existing research that said millennials weren't purchasing insurance products as much as previous generations. Though this was due to numerous reasons, many felt that they couldn’t trust insurance companies or that they lacked transparency. Through co-creation sessions, the team identified job-loss as a potential winning product, and so when I joined, our challenge was setup to be: how do we position this product to better address our market’s needs?

Throughout my 4-months on the team, my role was to ideate around the MVP strategy, as well as to design and test the first prototypes for the website.

Though we understood peoples’ general feelings towards insurance, I noticed we were missing data around how people felt about after they've lost their job. As we were working quickly, I launched a few unmoderated interviews on UserTesting to get some responses. I focused on asking individuals about the hardest things about the entire experience of losing their job(s), as well as about any advice they would give to someone if they were in the same boat.

When collecting and analyzing the data in Excel, I noticed emergent themes surrounding the financial hardship (this was expected), as well as the super-prominent emotional hardship (less expected). I found that the respondents spoke more about support and keeping themselves busy than they did about the actual financials. This was interesting data to consider, especially since we were heading towards a more financially-focused product.

First impressions are everything, so we looked at the ideal-state journey in which someone would consider purchasing this product. I found in my research that users could feel hopeless and irritated after losing their jobs, therefore we knew that we had to clearly explain when someone would be excluded from receiving a payout, with reasoning behind each one.

Starting with the question flow

One of our primary concerns when creating this product was that it would lead to “anti-selection”, or, only appealing to those that are not eligible for this insurance. As one of our main goals was to address the problem of trust, we wanted to be able to reject certain applicants right away, rather than perpetuating this view by taking their money and rejecting them when it’s time to pay out. We started with questions such as: Company Name, Company Size, Full-Time Employee Status, Knowledge of Being Laid Off, and Income.

Though we couldn’t verify this information at the time of sign-up, we ideated that during the time of claim, the user could upload a form that is signed by their employer for verification in order to receive their payout — in this case, we had to also place our trust in the customers.

Visually differentiating ourselves from traditional insurance

Visual design plays a huge role in a users' first impressions of a platform too, so we took this into consideration parallel to the journey.

The lack of trust was something we heard with respect to peoples’ attitudes towards insurance, so we looked at insurance startups to help inform some of our initial design direction. We liked Lemonade as their transparent policy (on Github), their clear exclusions and sign-up process, and its modern design really helped differentiate it from what traditional insurance sites looked like.

We went through some sketch iterations and then I jumped in and created prototypes to get some rapid feedback on. Using UserTesting, I asked questions around how they felt about the illustrations being shown on this page, as well as, if they understood why the questions were being asked of them. We got quite a bit of feedback.

Some of our questions were ambiguous

As we predicted, this ended up causing a lot of questions from our participants. Some of our questions such as “Which province do you live in?”, “What’s your email?” were asked to generate leads, however, participants were questioning why this was needed as some of the information could be gathered from the ROE.

A result of this problem, was that we began to add small descriptions under the heading/question to explain why we were asking each question.

We initially offered 3 tiers of plans by income group, as our research showed that layoffs were correlated to income groups. However, despite offering a catered option, lower income users really disliked this. We found that they felt excluded and that it wasn’t personalized, and wanted the option for the higher income plan even if they could not afford it.

For the final design, we opted for a calculator that would provide a more personalized option for each type of income. Each income, however, would receive their own 3 tiers of options, if they did in fact want to go for the most expensive coverage option. 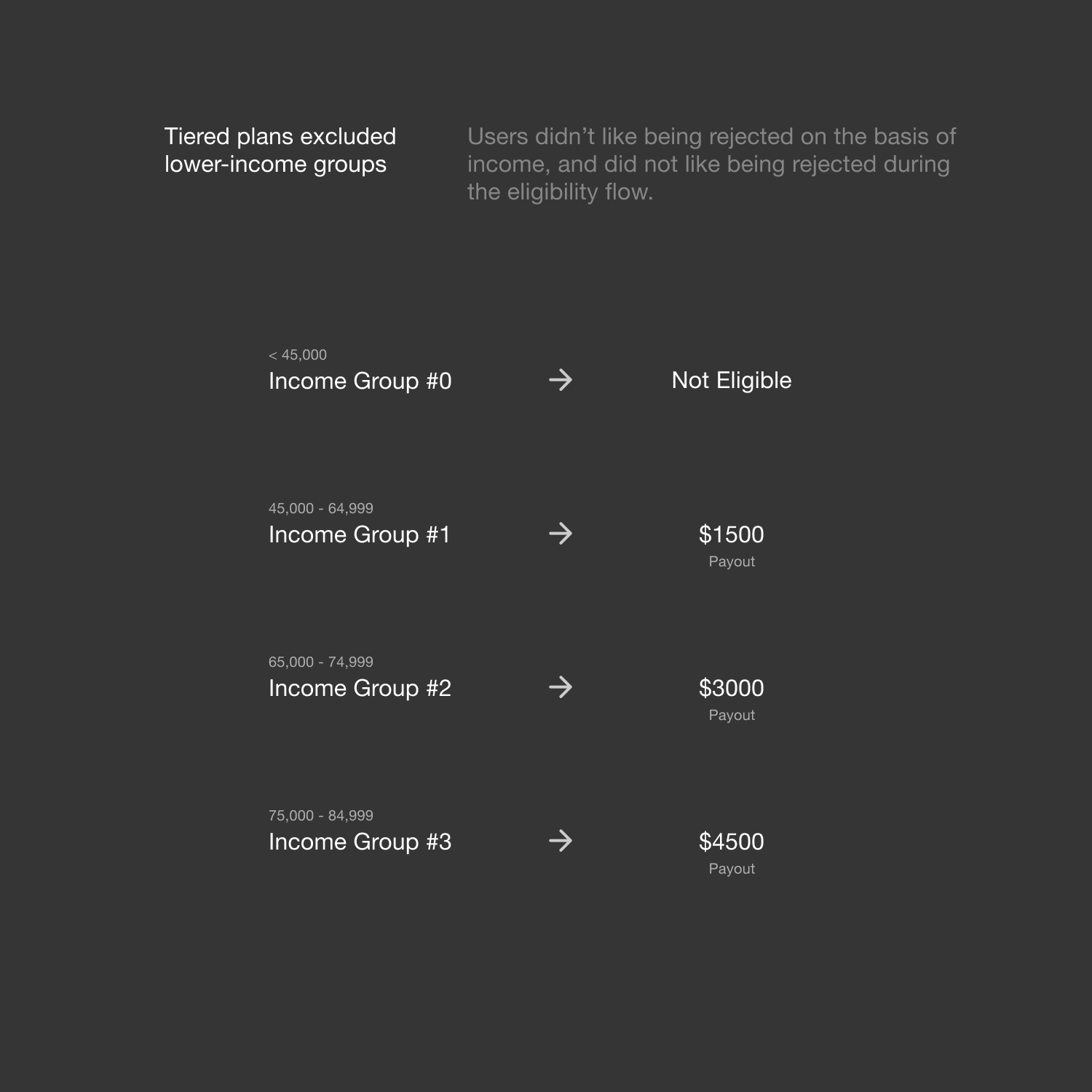 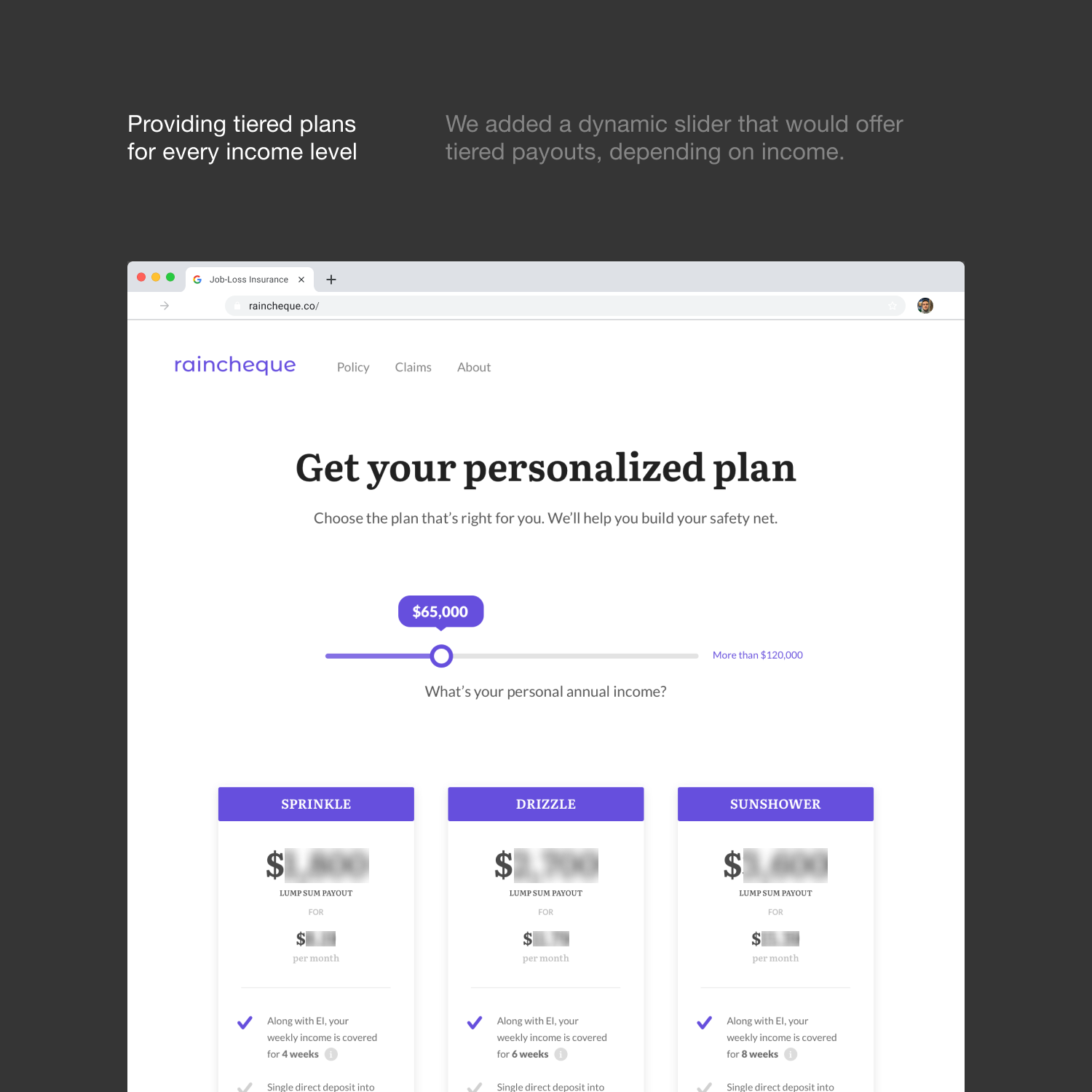 The Product Manager ideated Donut Charts as a way to help emulate how much our top-up could help, when coupled with EI. I designed it with our colours to be the darker purple. From our testing, we found that users liked the idea of the visuals, but did not understand it (poor execution on my part). I found that some missed the detail about the amount of weeks that they would be covered for, so that had to be made more salient. This was an important detail as this was the primary differentiator between each tiered plan.

In the end, we decided to completely scrap this visual and use the slider for tiered plans, depending on income, instead. 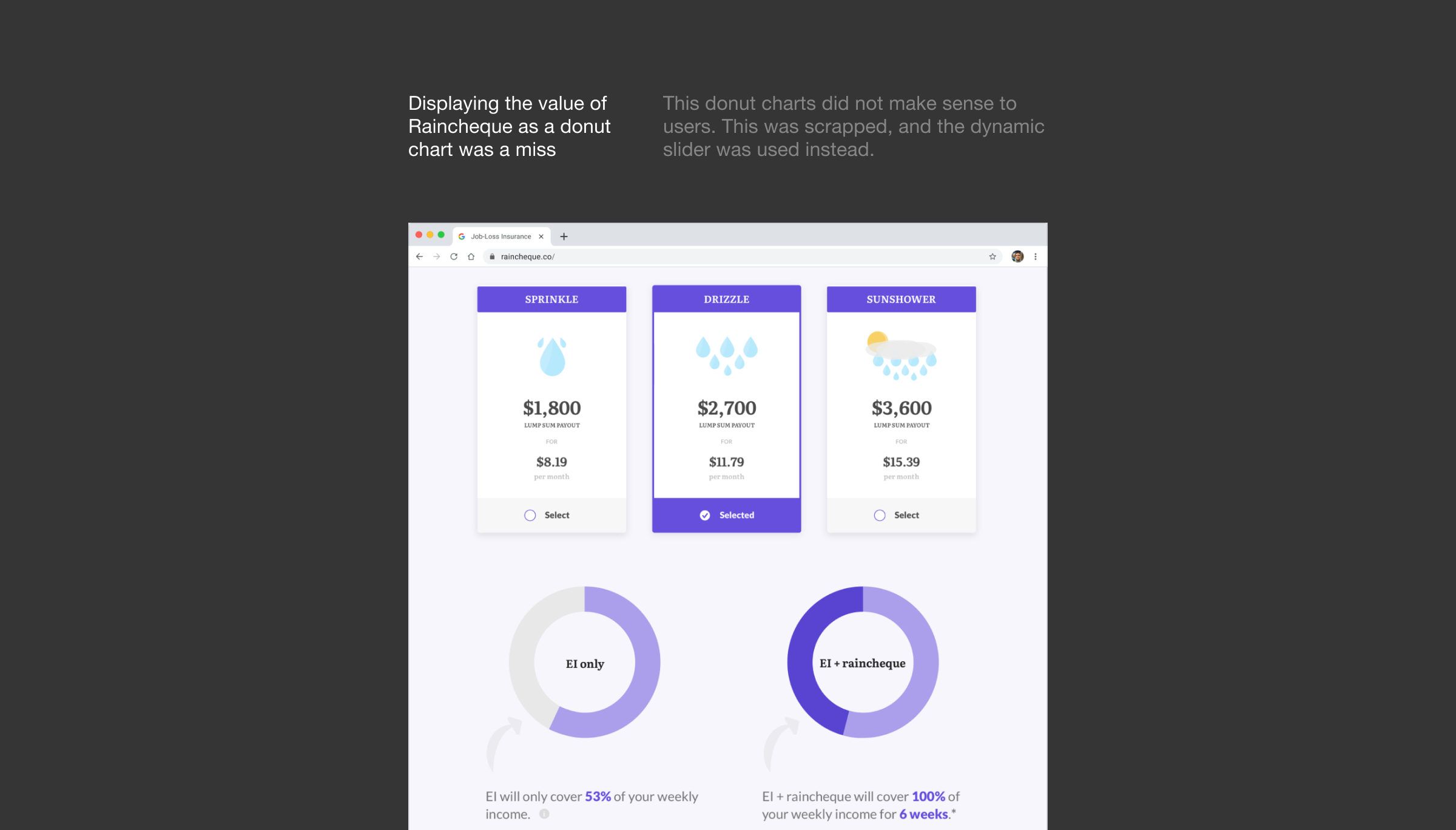 Following a few testing sessions through UserTesting, I worked on refining some of the above issues into a more comprehensive prototype. I found that the Product Manager and I were being held back a bit by focusing on the content, but at the same time, that was our primary objective to focus on. As we had a very simple site, with a linear sign-up, we had a lot more wiggle room to focus on how we worded every specific detail and a lot more time to think about the product strategy.

After over 5 launches on UserTesting.com (and a crazy amount of iterations), we ended up realizing that it's still an insurance product (surprise!).

We found that despite our efforts, the problem of anti-selection with early adopters & participants (mostly high-risk users were signing up) was still very prevalent. In addition, despite our efforts at transparency, we found the opposite reaction with our participants as they hated seeing the amount of exclusions. We knew we couldn't have a perfect product, therefore there'd have to be some sort of middle-ground.

I was exposed to consumer research, design research, UI design, marketing, business, and video editing all while working in a startup environment for 4 months. This was the first time I've been exposed to Lean Startup within the workplace and working so quickly and iteratively. It was also exciting working with so many people higher up in the organization and seeing how many different teams this type of project brings together.

Before working on this team, this is something I would’ve never expected from a large company. Being able to basically “wing-it” when it came to our methods of problem solving compared to having a systemic way of going about a process is refreshing. I also loved the fact that everyday was spent working on something different. One day I could be doing only UI, and the next, I could be working on strategy and help identify issues that could seriously affect the final product. It definitely wasn't dull, and gets me excited to work in something mixed in strategy and design.